Bengal cats, emus and sugar gliders - not caribou, salmon or deer - are the issue for some biologists at the Alaska Department of Fish and Game.

“I just got a call about a monkey on Friday, and another on Serval cats today,” said biologist Ryan Scott. “Monkeys are bad news, they carry some really nasty diseases.”

Scott is a wildlife biologist charged with overseeing some of the administrative aspects of wildlife biology for the Division of Wildlife Conservation. ...   Exotic Pets Article Continued 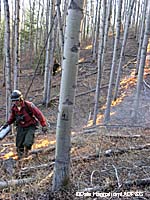 With a hot, dry spring, conditions were perfect for burning in Interior Alaska. The 26-acre fire burned hot in mid-May on Nenana Ridge south of Fairbanks, killing large stands of mature aspen trees.

This was not a natural wildland fire. The fire was started on purpose by the Alaska Department of Forestry, working with Fish and Game biologists to improve habitat for ruffed grouse. Fairbanks biologist Dale Haggstrom said the controlled burning top-kills the aspen trees, causing them to put ...   Burning for Grouse ArticleContinued

Aside from the misty rain, it has been a wonderful day on the water. You caught a couple coho salmon and your friend hauled in a king salmon. Someone else on the boat reeled in a legal lingcod. The captain of the boat has motored into the harbor and as she is tying off the boat, a young woman approaches. She's dressed in rain gear, a blue ball cap with the seal of the Alaska Department of Fish and Game (ADF&G) and carrying a weather proof clipboard. With a smile, she introduces herself as a creel ...   Creel Surveys ArticleContinued

Vanishing and reappearing bats, malformed frogs and declining loons and are just a few of Alaska wildlife mysteries Dave Tessler is investigating with the help of citizen scientists.

Based in Anchorage, Tessler is the regional nongame biologist for Southcentral Alaska. He's coordinating the Citizen Science program, working with wildlife watchers who are documenting their observations of loons, grebes, bats and wood frogs in Interior and Southcentral Alaska.

The Alaska Board of Game strives to provide subsistence hunting opportunities fairly among all residents under the current state law. But sometimes the demand is greater than the available resources and not everyone can be satisfied. The Tier II system attempts to allocate game among subsistence users. Tier II hunts are subsistence hunts for Alaska residents and a limited number of permits are issued. But who is eligible for these permits and how they are issued is contentious.

The ...   Tier II Gets a Look ArticleContinued

The Alaska duck stamp design for this year is from an acrylic painting by Don Moore of Monona, Wisconsin. Moore has won the Wisconsin waterfowl stamp competition three times and this merganser design took third place in the federal duck stamp contest.

The Hooded Merganser is the smallest of the three species of mergansers in North America. The common merganser and the red-breasted merganser are more abundant in Alaska than the hooded. On the West Coast, the range of the hooded ...   Merganser Featured ArticleContinued