About 75 Steller sea lions were crowded on the rocks at the haulout on Benjamin Island near Juneau, bellowing and roaring as they jockeyed for space. As the tourists aboard the whale watching charter snapped pictures and peered through binoculars at the massive marine carnivores, one woman turned to the onboard naturalist with a question:

“Why does that sea lion have a big number on his side?”

It's a question naturalist Abbey Norman heard off and on all last summer. Since 1994, ...   Marked Mammals ArticleContinued

About 3,600 Steller sea lions in Alaska have been marked with a letter and number combination over the past ten years, enabling biologists to identify individual animals. The letter indicates the rookery where the pup was born. For example, F551 is a male sea lion, born in June 1994 and marked as a pup at his birthplace, Forrester Island. He has been seen repeatedly at a haulout on the outer coast of Chichagof Island, and has been sighted as far west as Marmot Island, near Kodiak.

Below ...   What the Marks Mean ArticleContinued 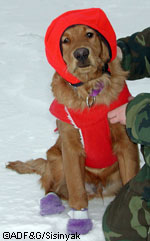 This was the remark made by an especially bored sixth grader on one of our Alaska Department of Fish and Game sponsored ice fishing outings. The fishing had been slow and the kids were all sitting around their ice fishing holes eating lunch. Richard Barnes, Fairbanks-based fisheries technician, replied, “You can't catch a fish on a Cheeto.”

“Why not? Have you ever tried it?” 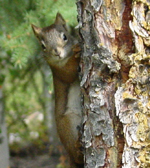 As winter settles in on the forests of Alaska, wildlife quiets down. Most songbirds are gone, and mammals like bears, bats and marmots are hibernating. But red squirrels, the marmots' tree-dwelling cousins, enliven the winter forest with their activity. These territorial, half-pound dynamos are active all winter long, guarding their food caches from marauding neighbors and scolding any interlopers.

Red squirrels are found in forests throughout Alaska, as far north and west as Council, on ...   Alaska's Squirrels ArticleContinued

In August of 2004, millions of salmon escaped into the Alagnak River system but failed to spawn. This was frustrating to fishery managers and fishermen alike.

What are Escapement Goals?

Escapement is the number of fish allowed to escape the fishery and spawn. There are several types of escapement goals.

The plight of the few remaining Gobi bears isn't of much interest to your average Alaskan, but it is to Harry Reynolds.

"It's not going to affect our lives in Fairbanks, whether the last 25 Gobi bears become extinct, but it's going to affect the lives of people in Mongolia," said Reynolds, a brown bear biologist for the Alaska Department of Fish and Game in Fairbanks. "The world is poorer when you lose something."

As one of the world's leading authorities ...   Lifetime with Bears ArticleContinued