The evening sun was low, the fall air cool – and my hunt over almost before it begun. I’d hardly settled in to watch a grassy meadow when the moose stepped out from some trees on the far side. The range was about 75 yards and I’d made out a small set of antlers extending just past the animal’s ears. Slowly, I’d lifted my binoculars, examined the antlers, and discovered the moose was a fork horn, legal in that area. 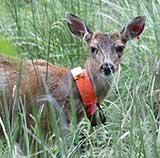 “We were guessing we lost 85 percent of the northeast Chichagof population, and we guessed we’d need five years to recover,” he said. “It’s been seven, but we’re here. We’re back in business.”

An Introduction to National Fish Habitat
Partnerships in Alaska

The Alaska Department of Fish and Game (ADF&G) participates in several programs that contribute to the conservation (protection, restoration, and/or enhancement) of fish and their habitat. Examples of the more commonly known programs include maintaining and updating the Anadromous Waters Catalog (AWC), collecting hydrologic and other data to develop reservations of water, ensure habitat connectivity by installing new culverts and repairing/replacing older culverts to maintain, restore or ...   Fish Partnerships Article Continued

The Kachemak Bay National Estuarine Research Reserve (KBNERR) is undergoing a sea change. We are parting ways with our current state partner, the Alaska Department of Fish and Game, Sport Fish Division (ADF&G), and have entered into a new partnership with the Alaska Center for Conservation Science (ACCS) at the University of Alaska, Anchorage. We will soon end our 11-year occupancy of the Alaska Islands and Ocean Visitor Center, but we’ll remain in Homer. We'll be at our current ...   KBNERR Article Continued

The line on your salmon fishing rod screams as it peels off the reel, causing your heart to race in anticipation of fighting, and hopefully landing, the iconic king or Chinook salmon that is doing its best to dive to the ocean depths. While catching these magnificent fish can be thrilling, it can be equally as exciting to anticipate the joys of sharing the bounty with friends and family around the dinner table. While king salmon are arguably one of the most sought after fish for sport anglers, ...   Why White King? Article Continued