Mountain goats are tricky. Nannies and billies look so similar that hunters have difficulty telling them apart, which makes wildlife management challenging. They are very difficult to hunt, but they are vulnerable to overhunting. Mountain goats are native only to western North America and inhabit some of the most inaccessible terrain imaginable, so they have not been well studied. But that's changing.

An abandoned gravel pit and residual berm “captured” a portion of the Anchor River in a flood in 2002 causing problems for the river's aquatic inhabitants including all five species of Pacific salmon. The Kenai Watershed Forum (KWF) stepped in and restored this section of the Anchor River to a more natural and fish friendly state in July.

The restoration site is located south of Anchor Point adjacent to the North Fork Road. The gravel pit began operation in 1984 and ceased activity by ...   Anchor River ArticleContinued

Whether in books, reality television or seafood marketing, the words “wild” and “Alaska” just seem to go together. Certainly much of Alaska is “wild” and we are fortunate to live in a land that stands in contrast to the developed areas in the contiguous 48 states. While many consider the “wild” areas of Alaska as “wilderness,” it is important to understand some of the legal distinctions between “designated wilderness” and other federal public lands. State biologists need to perform field work ...   Designated Wildernes ArticleContinued 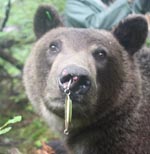 HAINES -- It took Fish and Game biologists about five minutes to remove the treble hook of a Pixie lure from the nostril of a brown bear yearling last week.

"I pushed in and backed it out, just like you would a hook in a fish's mouth. It came out real easy," said Anthony Crupi, assistant area biologist. "I'd been out fishing with my son last weekend, so I'd been practicing."

Crupi's crew tranquilized the bear -- and the sow that was protecting it -- near bear ...   Bear Cub Hooked ArticleContinued

Hunting Small Game in Alaska
Birds and Bunnies - where, how and when to go hunt

When you have shot one bird flying you have shot all birds flying. They are all different and they fly in different ways but the sensation is the same and the last one is as good as the first. – Ernest Hemingway

You’re marching under a late-September sun, shotgun over your shoulder glinting, the day bright and cold and marked by the sounds of your footsteps crunching over puddles brittle with new ice. You may be working a bench of willows for ptarmigan, or following ...   Small Game Hunting Article Continued