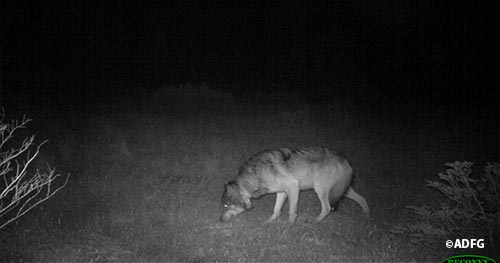 A wolf approaches the board and rubs on it.

In this study, 37 locations were chosen for hair snares in a roughly 1,400 square kilometer area of central Prince of Wales Island. The hair snares are 9"x6" flat boards with a few strands of barbed wire fastened to them. The boards are spiked into the ground and baited with a few drops of a musky scent lure that the wolves love to roll in. Traps were checked and cleaned every 10 days between Oct. 26 and Dec. 6, 2012. Ten trail cameras monitored activity at the sites. The camera images help biologists better estimate how many wolves were moving through the area, and to improve their techniques. As these photos show, more than wolves were attracted to the scent. Seven wolves were equipped with GPS collars as part of the study, and these appear in some of the images.

For more on the project, see the article in Alaska Fish and Wildlife News.