Alaska’s marine mammals range from ocean-dwelling creatures, like whales, to those dependent on the oceans for food, like polar bears. To learn more about these animals and where to see them, click on the links below. Be sure to check back as we continue to build the website and add more animals to the list.

To reduce the potential for harm to marine mammals, familiarize yourself with the guidelines and regulations concerning marine mammal viewing. 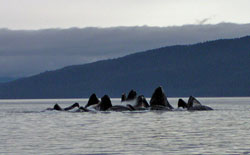 The humpback whale is one of the largest of the baleen whales and the only one that vocalizes. The male humpback croons an eerie complex song that may last from 10 to 20 minutes, is repeated for hours at a time, and changes gradually over the years. The whale song is not well understood but thought to play an important role in mate selection. So are the acrobatic displays of groups of two to 20 males gathered around a single female—displays which include breaching, spy-hopping, lob-tailing, tail-slapping, flipper-slapping, charging, and parrying

Humpbacks are powerful swimmers and use their massive tail fin, called a fluke, to propel themselves through the water, and sometimes into the air—landing with a tremendous splash. Scientists aren't sure if breaching serves a purpose, such as cleaning pests from the whale's skin or attracting a mate, or whether whales simply do it for fun.

Adult female humpbacks average 49 ft (15 m) in length and weigh approximately 35 tons. Males are slightly smaller. The humpback has a distinctly robust shape and is predominately black with varying degrees of white on the throat, belly, flippers, and flukes. The humpback is distinguished from other whales by its very long flippers (as much as a third of the whale’s length) with large knobs on the leading edge.

Humpback feed mostly on tiny shrimp called krill and various small schooling fishes. A humpback can eat up to 1.5 tons of food per day using the baleen in its mouth as a sieve. Baleen are the fringed plates which hang down from either side of the upper jaw. Humpbacks have 270 to 400 baleen plates, each about 30-inches long. As they feed, the pleated grooves in their throat expand to allow them to take in large volumes of water and food. As the mouth closes, water is forced through the baleen plates trapping food. 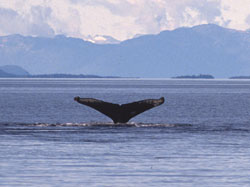 In the North Pacific, humpback whales migrate from winter breeding grounds near Japan, Hawaii or Mexico to summer feeding grounds, which extend from Washington State to the Chukchi Sea. They may be seen spring, summer, and fall in the chilly Alaskan waters of the Bering Sea, Aleutian Islands, Prince William Sound, Glacier Bay and throughout the Inside Passage of Southeast Alaska.

Humpback whales are found in the Barren Islands between Homer and Kodiak in summer. June and July are the best months to see them feed by bubble-netting where a group of whales will blow a net of bubbles to surround and confuse their prey then swim through the center, jaws wide, to scoop up the food. Perhaps the highest concentration of humpbacks, over 500 whales, is found in the Inside Passage. Many communities in Southeast and Southcentral Alaska offer whale watching tours. Check with local visitor bureaus and chambers of commerce for information.