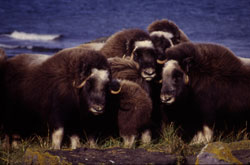 Muskox as a species have changed little since the last ice age. A close relative of sheep and goats, muskox have cloven hoofs, a stocky build with a slight shoulder hump, and a very short tail. Inupiaq-speaking Eskimos call them omingmak, “the animal with skin like a beard,” because of the long guard hair that hangs almost to the ground. Muskox are perfectly adapted to live in their harsh arctic environment. Their shaggy coat consists of the long, coarse, outer layer and short, fine underhair. This soft brownish wool-like underhair, or “qiviut,” is spun into yarn that is highly prized for its warmth and softness.

Both male and female muskox have horns but the horns of bulls are larger and heavier than those of cows. Bulls develop a horn boss, a rounded eminence, across the forehead. During rut, the bulls engage in violent and spectacular contests. From a distance of as much as 50 yards, they charge at top speed, colliding squarely on the horn bosses with a huge crash.

Mature bulls are about 5 ft high (1.5 m) at the shoulder and weigh 600 to 800 lbs (273 to 364 kg). Cows weigh about 200 lbs less. Muskox are herbivores, eating a wide variety of plants such as grasses, sedges, and woody plants. When danger approaches, they run together and form a defensive outward-facing ring. Wolves and grizzly bears are their main predators.

Muskox were found across Northern Europe, Asia, Greenland, and North America at the end of the last ice age but had disappeared from Europe and Asia by the 1800’s. By the 1920’s, they were found only in Arctic Canada and Greenland. Fears that the animal would become extinct led to the successful transplant of Greenland muskox to Alaska.

Muskox are often seen grazing on mountain slopes. Their short legs are not well adapted to deep snows so in winter they move to barren, wind blown summits where they remain for up to four months, living off their fat reserves and feeding very little.

The Seward Peninsula is an excellent place for roadside muskox viewing. Look for a number of dark spots on a hillside. Carry binoculars and scan ridgetops and high meadows in summer. On hot days look in the river bottoms too.

Muskox populations are also found on Nunivak Island, Nelson Island, north-central and northeastern Alaska, and the Yukon-Kuskokwim Delta along with captive animals in domestic and research herds.