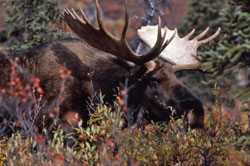 Moose (Alces alces) are the largest members of the deer family, and Alaska moose are the largest of all. They may appear gangly and awkward, but these imposing creatures can run at speeds of up to 35 mph and swim at 6 mph for up to two hours. A large bull can weigh up to 1,600 pounds and stand over seven feet tall at the shoulder. During the breeding season or “rut,” males joust with one another by bringing their massive antlers together and pushing. Cows with calves can be fiercely protective.

Moose often venture into urban neighborhoods and may even be seen strolling along city streets. In summer, they frequently wade and swim in lakes and ponds, foraging for tender aquatic plants. Winter is more challenging although they are well-equipped against the cold. The long brown and gray hairs that make up their thick coats are hollow giving them added insulation and buoyancy. However, moose must browse constantly in winter to absorb enough calories from a diet of mostly willow, birch, aspen twigs and bark. They are vulnerable to wolves in heavy snows. 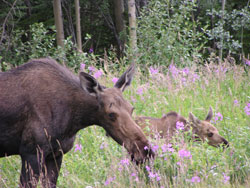 Moose are generally associated with northern forests in North America, Europe, and Russia. In Alaska, look for them in suitable habitat from the Unuk River east of Wrangell in Southeast Alaska to the Colville River on the Arctic Slope. They are most abundant in recently burned areas with dense stands of willow, aspen and birch shrubs; on timberline plateaus; and along the major rivers of Southcentral and Interior Alaska.