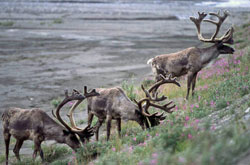 Symbols of the wild north, caribou are a sought after species for wildlife viewers in Alaska. These “wandering deer” are native to North America, Europe, and Asia.

Caribou spend most of their lives in open country. They are superbly adapted to cold, wind, and snow. Their coats are thick with hollow hairs, which provide outstanding insulation. Their large feet act as snowshoes, shovels and even paddles in water, allowing them to travel efficiently and also to dig down to their chief winter forage plants such as lichens (reindeer moss), dried sedges and grasses, and small shrubs. In summer they still feed primarily on lichen, but also will graze on mosses and shrubs.

Weighing 175–400 lbs, caribou are much smaller than moose. Their natty coffee-and-cream coats and magnificent summer racks are very distinctive, as are their oversized, splayed feet. Both male and female caribou grow antlers (males’ antlers are much larger). Pregnant females keep their antlers, while males and other females shed theirs in the winter or early spring.

Caribou live in arctic tundra, mountain tundra, and northern forests. In Alaska, caribou are distributed in 32 herds (or populations). A herd uses a calving area that is separate from the calving areas of other herds, but different herds may mix together on winter ranges. Calving areas are usually located in mountains or open coastal tundra.

In the summer, watch for small groups of caribou in the remaining snow patches high on the mountains. This is their escape from biting insects. If you are traveling on the Nome roadways, you are more likely to encounter reindeer than caribou. Though considered the same species and able to interbreed, caribou are wild and reindeer are privately-owned. Thousands of years of genetic separation have allowed for some physical differences too. Reindeer tend to be shorter-legged, have slightly larger noses, and slightly smaller antlers. Also, the hides of some reindeer are spotted with white or even entirely white, which is not seen in caribou. Ear tags on reindeer are another give-away. Reindeer are herd-oriented and typically found in relatively concentrated groups, while wild caribou may be scattered across miles of terrain. It is sometimes possible to encounter caribou at the north end of the Kougarok Road in late fall.

If you are close to a herd on the move, listen for the loud clicking noises made by tendons rubbing on bones in their ankles.