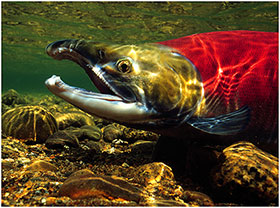 A genetic baseline that includes populations from throughout Southeast Alaska and British Columbia was completed in 2008 using 45 single nucleotide polymorphism (SNP) markers (Habicht et al. 2010). An update to the genetic baseline consisting of 113 sockeye populations from Southeast Alaska and British Columbia was completed in 2011 by the department; however, some smaller populations in the study area are either under-represented or not represented at all. Therefore, this project seeks to collect baseline samples from these locations. The goal of this project is to improve the genetic baseline by the collection of further samples from specific areas to provide for genetic based stock composition estimates of sockeye salmon harvested in the Chatham Strait and Icy Strait purse seine and Lynn Canal drift gillnet fisheries.

The sockeye stock composition data from the Chatham Strait, Icy Strait, and Lynn Canal commercial fisheries obtained in this project will, in conjunction with existing escapement monitoring projects, provide essential information for a more complete run reconstruction (an estimate of the timing and abundance of a salmon stock) for stocks of interest.