The diversity of Alaska's fish species and fishing opportunities are unequaled. The salmon species found in Alaskan waters are some of the largest in the world, the rainbow trout and grayling fishing in the state is exceptional, and anglers could spend years pursuing the state's countless saltwater species. These unique attributes of Alaskan fisheries attract a diverse array of anglers. Alaska is one of very few locations worldwide where truly wild fisheries still exist. Sport fishing in Alaska requires sound and ethical angling practices to ensure its continued health and opportunity. 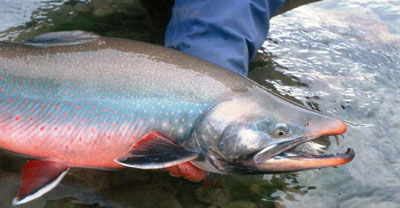 Proper release practices are used by anglers who desire to enjoy fishing in Alaska and who would like to preserve the resource for future generations. Anglers release fish for a number of different reasons. They may choose to release a fish because it is not the targeted species, not of legal size, not edible, or if the fish is improperly hooked (snagged) in freshwater, regulation mandates that the fish be released immediately.

To some, the value of a day spent fishing is not measured in harvest, but in the experience outdoors. Regardless of an angler's motivation for releasing, fish survival can be increased by following a few simple steps. The practices detailed in this brochure are some of the most important steps an angler can take to sustain Alaskan fisheries. By following these tips, an angler is doing their part to help maintain and preserve one of the world's most unique and important resources.

Be sure to wet your hands before handling the fish. 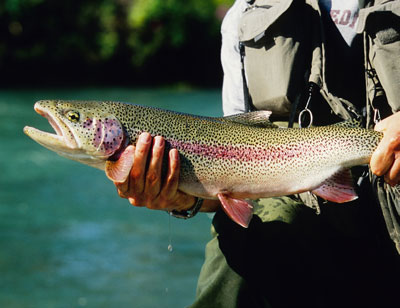 The use of bait greatly increases the chances of hooking a fish in in vital areas such as the gills or esophagus.

Keep the fish in the water while handling. The longer the fish is out of the water the lower the chance of survival. A good rule is to hold your breath while the fish is out of the water. When you need to breathe, so does the fish. If you do handle a fish with your hands, make sure to wet them first. Dry hands can rub the slime coat off the fish. This is a protective layer on their skin, which protects them from infection. Do not touch the eyes or gills of the fish. If you need to hold a fish, do so by gently placing one hand on the underside of the fish by the pectoral fins and the other near the base of the tail. This will help avoid injury to the internal organs. Never hold a fish vertically, only horizontally. Never squeeze your fish or hold them by their jaw or gill plate. Never hold a fish up by its tail, this can dislocate their back. Never let a fish drop to the ground or on the floor of the boat. 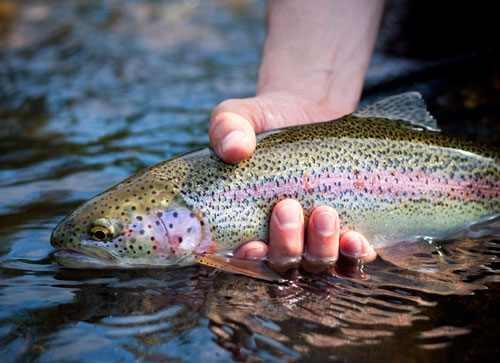 It is illegal in some areas of Alaska to remove a fish from the water.

Being a Steward of the Resource

Anglers take pride in harvesting fish for personal consumption. Fish are healthy and provide a significant amount of protein. When releasing fish, practicing proper release methods promotes sustainable fisheries and helps ensure Alaska's fishing legacy remains healthy and intact well into the future. It's truly up to the angler to choose to be a steward of the resources that comprise Alaska's unique natural world.