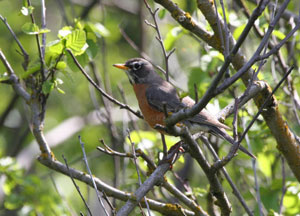 Robin (Turdus migratorius), the quintessential early bird, may be a common sight in suburban America, tugging earthworms out of dew-sparkled lawns, but it finds a home in wilder regions too. The summer breeding grounds of the robin extend as far north as the Brooks Range and as far west as the tip of the Aleutian chain.

Alaskan children like to keep a lookout for that “first robin” of spring. While some scientists say robin’s spring migration follows the northward creep of 36ºF average temperatures, others believe the availability of food plays a greater role than temperature. Indeed, some Alaskan communities find robins sticking around for the winter foraging for left-over berries. While most robins do migrate south, some also stay, usually during milder winters.

The website Journey North has an American Robin Migration Tracking Project where citizen scientists, many of them schoolchildren, report observations of the first robin of spring, first waves of robins and first robin song of spring. In 2010, the website reported robins entering Southeast Alaska in early April and arriving at Shageluk, Alaska, almost 700 miles north on April 26. Robins generally start to sing when they reach their breeding territories but will sometimes sing in winter flocks if they sense spring is nigh.

The robin is a member of the thrush family. The varied thrush (Ixoreus naevius) is nicknamed the “winter” or “Alaskan” robin, and its size and shape closely resembles the American robin. Its song, a beautiful long buzzy one-note tone, is one of the first signs of spring in Southeast Alaska. This secretive songbird prefers to nest in mature, dark coniferous forests.