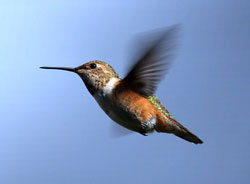 Feisty and far-flung, the rufous hummingbird (Selasphorus rufus) has the northernmost breeding range of any hummingbird in the world.

A relatively small hummingbird, with a slender nearly straight bill, the male rufous glows like a bed of coals with bright orange on the belly and back and an iridescent-red throat. Females are green above with rufous-washed flanks and rufous patches in the green tail and often show a spot of orange on the throat.

You can read more about the bird’s extraordinary journey in this article in Alaska Fish and Wildlife News.

Scientists have found that the birds not only return to the same wintering areas each year, they return to the exact same flower bushes and feeders. As it darts from flower to flower dipping its long bill into the nectar, the rufous is believed to be contributing—albeit accidentally— to the pollination of many plants, such as the western columbine and Indian’s paintbrush.

The rufous is the only hummingbird commonly found in Southeast and Southcentral Alaska. Anna’s and Costa’s hummingbirds are considered casual in these two regions.