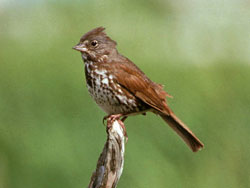 A chubby, heavily streaked sparrow, the fox sparrow (Passerella iliaca) is most familiar as a migrant or wintering bird. It scratches so vigorously, kicking backwards to uncover food in bird feeders and piles of leaves, that it often sounds like a much larger animal.

Fox sparrows are widespread across the U.S. and depending on where they come from, the birds have distinctly different coloration, bill size and calls. Some researchers have proposed reclassifying the fox sparrow into four genetically distinct species. A dark brown form of the bird breeds along the Aleutian Islands and winters in Alaska. A boreal rusty-backed form also breeds in Alaska.

The fox sparrow's lively song, a loud, ringing whistle, can be heard occasionally during migration.