You are here: ADF&G Home » Species » Pets
Sign in
myADF&G

Alaska’s laws on pets, livestock, their importation and release are strict, and for good reason: Alaska has some of the most productive and unique ecosystems on the continent. It is also seasonal home to countless migratory species. Many of these species, such as songbirds, waterfowl, and birds of prey, travel long distances to spend summers in Alaska rearing the next generation.

Escape or unlawful release of pets is just one of many methods of introduction by which harmful nonnative species can become established in Alaska. These situations and other types of interactions involving pets often result in long-term adverse effects on, and even elimination of, local fish and wildlife populations. Domestic pets and livestock can also have other, less direct, effects on wild species. These include introducing diseases and transporting parasites into wildlife habitat. The Alaska Department of Fish and Game (ADF&G) and the Alaska Boards of Fish and Game take their responsibilities for protecting and maintaining native populations of fish and wildlife very seriously. Falconry is regulated as a hunting activity, not under rules for pets.

Remember, it is not legal to release pets into the wild under any circumstances.

What Pets Can I Own? 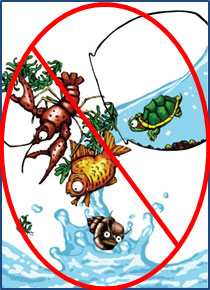